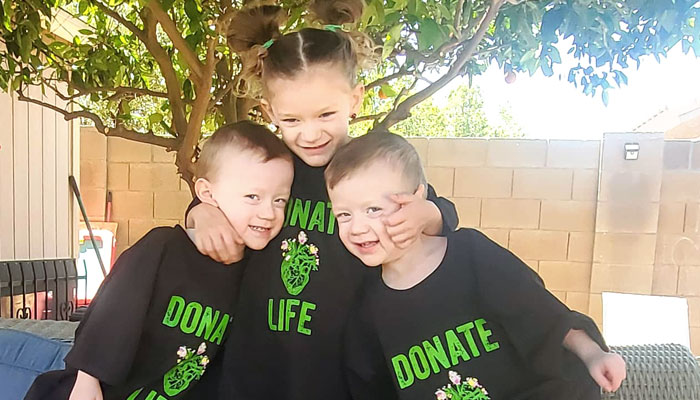 Our story began in January of 2018 when our then two-year-old daughter, Isabel, became extremely sick. She was diagnosed with a rare heart failure condition (restrictive cardiomiopathy). There was no cure or treatment, our only option was a heart transplant. She was listed for transplant in March 2018 and received her heart in May 2018.

At the time of her diagnosis we also had nine-week-old twin boys (Jason and Jaxon). They were evaluated immediately but were okay, until they weren’t. Right after their first birthday Jason would go on to suffer three cardiac arrests which lead to pacemakers in both boys. Jaxon’s heart trend always followed right behind his brother. After a year and a half with pacemakers, Jason would suffer yet another cardiac arrest. This time it was a 40 minute code, ventricular fibrillation. There wasn’t a lot of hope, no signs of brain function and labs on other organs were coming back with devastating results. Listing for transplant seemed impossible as he had to show some sort of neurological function and show that no other organs were damaged in order to be listed. But then by some miracle Jason opened his eyes! Labs improved and he was listed for transplant June 9, 2020 and received his heart June 30, 2020. Again he saved his brother’s life as they pushed for Jaxon to be listed sooner, and he was! Jaxon was listed June 17, 2020 and his heart came September 2020.

Thank you to our beautiful donor and their families for agreeing to organ donation and saving their lives. There is always an extra plate out at holidays, birthday cake for birthdays, and we celebrate them as much as possible. This year we planned forget-me-nots on National Donor Day in honor of them. I promise my children will always know their hearts beat for two and I hope we make you proud. Thank you from the bottom of my heart.

And of course thank you to the village that made the surgery possible. UNOS, Children’s Hospital transplant team/CVICU, and the hundreds of nurses and doctors that have come into our lives. Thank you all. It took a village but you all saved my babies. I’m forever grateful and will spend my life advocating for organ donation so others can have the chance we have.