David ‘SKi’ Skalski: Everything counts, the air I breathe 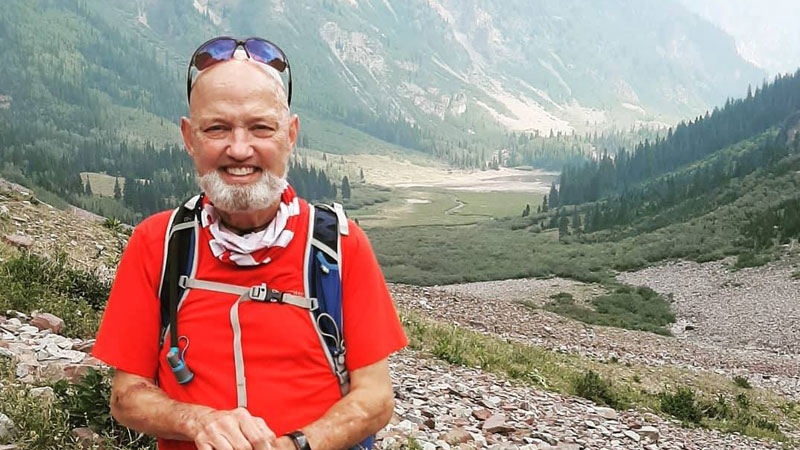 On a Saturday in May 2017, I umpired eight straight field hockey games in eight hours, four of which were outdoors in the rain. That was nothing unusual for me.

By Tuesday, I was on my way to the local intensive care unit. I could hardly breathe. I was told I had a lung disease that had been lurking unnoticed for years. I was eventually diagnosed with Interstitial Lung Disease (ILD), which causes lung tissue not to work efficiently, and Myositis MDA5, muscle inflammation that scars the lung tissue. In just three days on that dark Tuesday in May 2017, 75% of my lungs were scarred and permanently destroyed.

In my hospital bed, after extensive biopsies, I had a hand towel rolled up in each hand, and I was moving my fists up and down. They thought I was delirious from the anesthesia. I can’t speak to any of that. But I remember this and always will: “I was gripping my trusty hiking sticks. I could see myself at Kibo Hut, base camp on Mt. Kilimanjaro at 15,961 feet, at 50% oxygen. Up in the distance I could see Gilman Peak at 18,885 feet, then Stella Point ahead of me, and eventually I was just 1,000 meters from Uhuru Peak, the 19,341 feet summit”. In the hospital, in that bed, in my mind, I was conquering my mountain.

Doctors determined pretty quickly that I needed a lung transplant to survive.

On August 1, I was called to the hospital to receive my transplant. I was rushed into the operating room, with doctors and nurses buzzing all around me. My left lung transplant took over seven hours. When I woke up in the ICU, I was feeling and breathing better than I had for the past 17 years. Virtually no pain. More importantly, I was down to one liter of oxygen through my cannula versus the 15 liters I had needed just to keep my lungs afloat.

I knew the transplant worked right away. 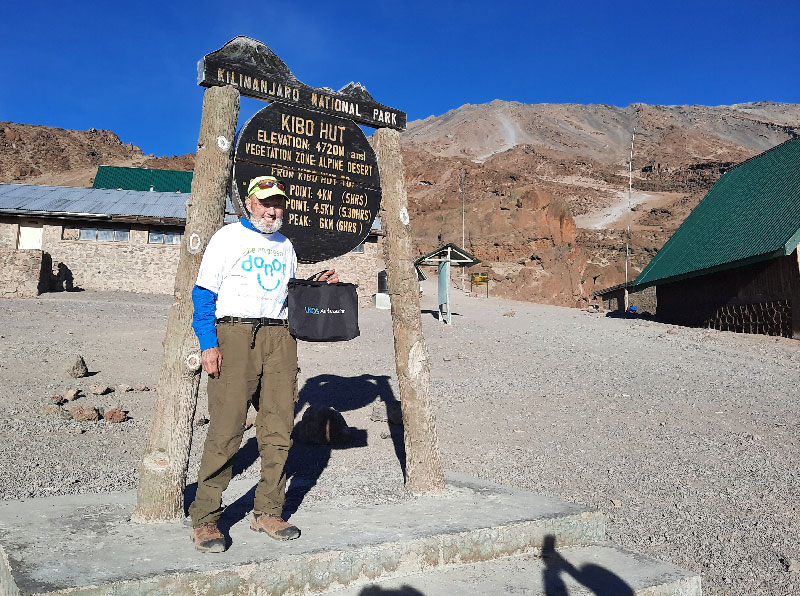 January, three years later, I restarted my Kilimanjaro training schedule for the third time. We contracted with Good Earth Tours, a Trekking and Safari Company in Arusha, Tanzania. Outfitted with climbing boots, hiking poles and a full backpack with a hydra water system, I trekked around Lancaster, Pennsylvania trails five days a week for 10 months. I trained in the rain and the wind, and the sun, and the heat of the day. I even trained in the dark of the night during a driving snowy blizzard with winds gusting 35 mph. While hiking up Kilimanjaro, we will climb through five climate changes from tropical to sub-arctic. I must be prepared for anything the mountain might throw at me and my daughter, Alaina, who will climb with me.

Climbing Mount Kilimanjaro is also a test of the mind. It is a long, slow trek (45 miles over seven days, uphill). The mountain is considered a non-technical climb, which means no ropes, no picks and no pitons — just hiking. Professional guides lead the way on established paths and porters carry the bulk of the load including tents, sleeping bags, food and water. Hikers tote their personal gear in a daypack and walk “pole-pole”. Pronounced “pool-lee, pool-lee” in Swahili, meaning slowly slowly, to help your body acclimatize to the thinning oxygen.

During the ascent, climbers will lose 50% of the oxygen available from when they started at the base of the mountain. Altitude Mountain Sickness (AMS) is a real possibility. The penultimate experience is the summit approach. This day starts at 2:00 a.m. in the pitch black of night, so climbers arrive at Uhuru Peak at sunrise. Visibility increases as the clouds burn off and you can see the Island of Zanzibar 200 miles due east off the coast of Africa.

I am dedicating this climb to two very special people who affected my life in more ways than they know. First to John T, a young man from the Chicago area whose tragic loss turned into my precious gain. Without his life-sustaining gift, I would not be alive today. According to his mother, Jean T, John was “… a kind and generous person. He loved sports, animals and family. He was a gifted athlete with a bright future ahead of him in baseball, until mononucleosis stole that away prior to the spring season of his junior year. He adapted, changed course and taught himself to play guitar. Plus, he wrote music and performed at some cool spots including Chicago’s ‘House of Blues’. He also liked the outdoors. Jean said: “I’m sure he’d approve of your Kilimanjaro trek”.

During a recent conversation, Jean surprised me stating, “I’m not sure if you know, but we had John cremated. We still have some of his ashes, and I wonder if you would be willing to carry them to the top of Kilimanjaro and spread them over the Roof of Africa”. I was flabbergasted. She changed my purpose for climbing ‘Kili’ in a milli-second. I told her I would be honored. So, we will be literally carrying him to the top of the world. And, he is still propelling me to reach new heights. We have to make it now, more than ever.

Second, my brother Tommy will be carrying me in mind and spirit. Tom was THE definition of a ‘good guy’. I trusted him with my life. When he visited me in the hospital (one of his least favorite places to be), he said, “Dave, you’re still going to climb that mountain, even if I have to carry you on my back.” And, he would have. He’s been carrying me for a long time. I’m just asking him to do it one more time in October. He passed away in September of 2019, after visiting me one last time. I love you Tom.

With your permission, I am going to skip forward to the final assent. We went to bed early at 8:00 p.m. We were already dressed in our hiking clothes in our sleeping bags. I had on three pairs of socks, five pairs of pants, five shirts, a down vest, a down jacket, a balaclava head covering, and mittens with hand warmers inside. We were so excited; we had a hard time falling asleep.

The morning started with a 1:00 a.m. wake up call. Breakfast opened with our normal porridge, hot tea, eggs and sausage. By 2:00 a.m. we were all geared up and ready to go. Starting at 15,931 feet, it was a pitch-black, new moon night, stars so bright you felt as if you could reach up and grab them. Off we went into the darkness. During this stage, I had the use of an oxygen tank. My pulse readings had been dropping for the previous five days. What started at 97%, had steadily dropped to the mid 70’s, but the rush of O2 really seemed to help. We climbed for two hours with headlamps showing us the way. At 16,444 feet, I had asked our guides for a sit-down break (‘Ca’ or sit, in Swahili). I can usually recover my oxygen percentage in under two minutes, back up to the mid 80’s. Meanwhile, and unbeknownst to me, Alaina was conferring with both guides. They let my daughter do the talking, because they knew I would listen to her. She pronounced that they had decided I should go back down to base camp. But, I already knew. Deep inside me, I knew I could not maintain my O2 demands. I wasn’t going to make it to Uhuru Peak. However, Alaina and I had already set the R-o-E. If we both made it to base camp, Kibo Hut, and one of us had to go down, the other would continue to the top. Decision made. 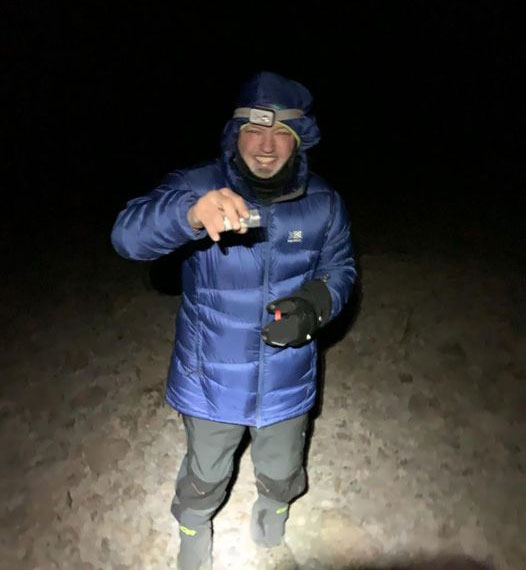 Most climbers say it is the hardest thing they have ever done, but the most rewarding too. Except, they don’t clarify what the “hardest thing” truly means. We began our trek on October 9, 2020 and Alaina summited on October 14, after climbing 14+ hours. We finished at the Marangu Gate on October 15th. She also told me, ‘I did it for John’.

I had asked Amani not to tell me if she made it, as I wanted to see the expression on her face. When she arrived at base camp, she was wearing an ear-to ear-smile, arms spread in the air like ‘Rocky’ with her sticks out wide. That said it all. I knew immediately she made ‘OUR’ goal. She spread John’s ashes into the ferocious winds aloft and the three of us became part of Kilimanjaro. I am so proud of her.

Climbing Mt Kilimanjaro, my 10-year goal, was everything I expected it to be and more. Much, much more. We were both thoroughly exhausted and couldn’t wait for a hot shower, cold beer and a soft bed.

My dad taught me from an early age, everything counts. Up to the exact this point in time, you are a culmination of everything you have done over the expanse of your life. I’ve taught my children this exact same thing.

During our flight between Ethiopia and Dublin, it finally hit me our climb would affect four generations. I was in awe of what I just accomplished, affecting me, my wife Tina, and my siblings. Alaina is one of the strongest women I know, and this feat will boost her confidence for the rest of her life. Wow!! Check off the next generation. She will tell her future children about the time she and GrandPap Ski climbed Kilimanjaro. Gen. three!! Then I stated, “when I am in heaven, and you have grandchildren, you will be gathering for a traditional Thanksgiving dinner at your son or daughter’s house. Your grandchildren will gather around you near the fireplace before dinner is served. They will all chime in and ask: Grandma, will you tell us about the time you and Great GrandPap Ski climbed that mountain in Africa?”. We both cried. Generationally, EVERYTHING counts.

I made it to the highest point I have ever climbed. This crazy, crazy goal of mine has given me a new purpose in life. After we spread John T’s ashes, it means the world to me, to Alaina and to John’s family.

I have been sharing my story through UNOS, and I hope to tell the world. Please become an organ donor, and know there is life after Transplant. Any life you want. After that horrible night in May 17, when I was strapped to a hospital bed, with tubes coming out of my chest, my daughter said to me, “Dad, you have already conquered your mountain.” And, in many, many ways I have.

UNOS is continuously working to increase the number of transplants. You can contribute to this work by giving and encouraging others to give during #LifeGivingTuesday. Learn more.