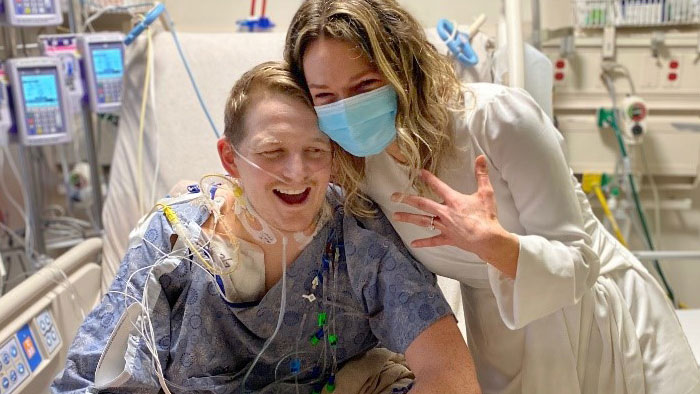 My name is Joey Moughan, and I’m from Virginia Beach, VA. Until relatively recently, I was in pretty good physical shape. Though I was never a bronzed Adonis, I wrestled and ran cross country in high school and wrestled in college and exercised regularly.

After college, I graduated from Officer Candidate School with the Marine Corps and commissioned as a 2nd Lieutenant when I was 22. In July 2019, I was in a pre-deployment workup with my platoon when one day I was called into the Camp Lejeune Medical Officer’s office. I was told that there were some issues with my kidney function that had appeared on some blood tests and that I would be unable to deploy with my Marines.

I returned to my home unit in Little Creek, VA, and began to monitor my kidney function a little more closely. It was around this time that I began dating a beautiful, intelligent woman named Caroline with whom I’d interned alongside a few summers prior.

A year and a half went by, and in January 2021 I finished a weekend training session with my Marines. I returned home and went to bed feeling normal. Around 2:00 AM, I woke up with a considerable amount of abdominal discomfort. It felt like I’d overeaten at Thanksgiving and couldn’t expand my lungs all the way. I thought I’d gotten COVID and took a trip to Patient First a few days later when my symptoms hadn’t improved.

I tested negative for COVID, so the staff decided to administer a chest X-Ray to look for signs of Pneumonia. They found none but commented that my heart looked a little enlarged and recommended doing an EKG. My numbers were out of normal ranges, so it was recommended that I see a cardiologist. I reached out to one locally and was scheduled to receive an echocardiogram a week later. I was told by the cardiology team that if my symptoms worsened to just go straight to the hospital and not to wait for my appointment.

Three days later, I had been unable to sleep as I was having severe dyspnea—the feeling of asphyxiating when laying flat. Caroline and my mom implored me to just go to the hospital and get checked out, and I agreed. I was checked in by 8AM and given an echocardiogram. The results were surprising to say the least; I was diagnosed with end-stage Dilated Cardiomyopathy, a type of heart failure, with an ejection fraction (EF) (the measurement of how efficiently your heart is pumping oxygenated blood to your body) of only 5%. The normal EF range is 55-65%. My heart was also approximately double the size of a healthy adult heart. Further, my heart failure was idiopathic—the doctors didn’t know what caused it. I have a mutation in one of my genes called TTN that predisposes me to certain heart conditions, but no one is sure what caused my heart to balloon up and stop working properly. I was admitted for just over a week, placed on the UNOS Heart Transplant List as a Status 6 candidate, implanted with a subcutaneous defibrillator in the left side of my chest, and I was eventually sent home with several new oral medications that the heart hospital’s team hoped would facilitate my heart’s return to normal.

By May, my numbers hadn’t improved at all. While I was feeling physically better than when I was originally admitted, I could still feel that something was off. My heart was unable to pump out excess fluid which prevented my digestive system from processing food correctly. As a result, I began rapidly gaining water weight and my stomach constantly felt very full while still being hungry. It was a very strange, uncomfortable sensation. I was re-admitted the day after my younger brother graduated college, and a peripherally inserted central catheter (PICC) line was inserted in my right brachial vein, and I was upgraded to a Status 4 on the heart transplant list. The PICC line ran from my arm through my vein into my heart, where it administered a constant supply of a heart failure medication called Milrinone to boost my heart’s function. I stored the Milrinone and the pump that administered it in a fanny pack that I wore for the better part of a year.

The Milrinone wouldn’t help me permanently recover, but it did give me lots of extra energy and helped me return to a feeling of relative normalcy. I tried to stay active, ran up to two miles in my neighborhood at a time—albeit at a very slow pace—went to the gym, disc golfed regularly, and even took a week-long trip with Caroline to Las Vegas, Lake Tahoe, and Seattle. We got engaged on this trip at an overlook of Lake Tahoe called Monkey Rock. I felt like I was going to pass out and die on the short but steep hike up to the overlook, but I’d been hiding the engagement ring from Caroline for weeks and always sent her to baggage claim while I was going through airport security so a TSA agent wouldn’t pull it out right in front of her. I’d also hired a photographer to meet us up there and take pictures of the engagement secretly. I was determined to make it up to the top, propose, get a nice picture for Caroline, and then maybe pass out and die. Luckily, we made it up without issue and she said yes! 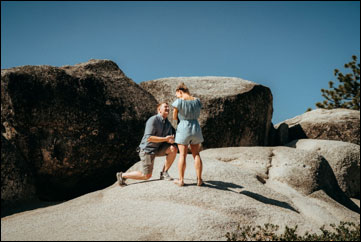 Against all odds, I landed a catch as out of my league as Caroline!

After we returned as a newly engaged couple, wedding planning began. We chose March 4th, 2022 for our wedding date and Caroline jumped head-first into coordinating everything. She did a fantastic job! However, I threw a bit of a monkey wrench into her planning.

In mid-January 2022 I began getting low-grade fevers at night and coughing up some blood. My symptoms continued to get worse, and I was less and less able to sleep due to returning dyspnea. Caroline, hyper vigilant and concerned about me as always, had me call my transplant coordinator, who recommended I come in for immediate evaluation. Despite the knowledge that I would probably be stuck in the hospital for a substantial period again, I didn’t have the energy to do anything but comply. On January 27th, 2022 I was admitted to the hospital again. I had a fever of 103 and felt terrible. As it turns out, I had pneumonia and was septic with a severe blood infection stemming from my PICC line. These had caused my heart failure to worsen, and after a few days in the Advanced Heart Failure Unit I was transferred to the Cardiac ICU (CICU).

On January 31st, while in the CICU, I was told that I’d need to be put on a life support machine called an Impella that helps pump extra fluid out of the heart and lungs since my heart wasn’t capable of pumping at a normal level. I was told that, because I was so sick at the time, the procedure to implant the Impella would be very risky, with only about a 40% chance that I would survive the process. It was daunting, but as I was being put under anesthesia I wasn’t scared; I just thought about how great a life I’ve had and how lucky I am compared to 99.9% of all humans to have ever lived. My last thoughts I thought I may ever have were about my beautiful fiancée, Caroline, memories of wrestling for my high school, memories of training with the Marine Corps, and the fact that my last name is Moughan and how proud I am of my family and all those who came before me. These are all the most positive and formative aspects of my life to this point, and I wouldn’t trade any of those core four points of my being for anything.

The Impella implantation was a success, I was transferred to the Cardiac Surgery ICU (CSICU) and on February 7th, I got to marry my best friend, Caroline while in my hospital bed. She has been such an absolute rock for me to lean upon during this entire process, and I love her with all my heart (the old one and the new). Since I was diagnosed, Caroline founded a Student Organ Donation Association with her PhD program at her university and is personally responsible for nearly 25 people newly registering as organ donors, which could potentially save hundreds of lives. She is such a caring, radiant person and she truly brings light and positivity to anyone she meets.

Caroline and I got married in a small ceremony in my CSICU room. My medical staff attended, and it was an excellent experience!

With the Impella implanted, I was upgraded to a Status 2 on the Heart Transplant list. I was further upgraded to a Status 1 a few days later. On Saturday, February 19th, I received my heart transplant. The medical staff at my transplant hospital is comprised entirely of consummate professionals, and I had no doubts that the procedure would be a success. I woke up the next morning around 5 AM, my breathing tube was removed, and I began the track to recovery! My nursing staff was nothing short of phenomenal, and they should all be commended. The friendship and care I’d received from everyone at at the hospital made the transplant process so much easier and more positive than I ever thought possible.

I was discharged on March 2, 2022. At the time of writing this, I’ve lost 50 pounds exactly—225.6 to 175.6—of excess fluid that my body had been unable to process and get rid of from when I was admitted on January 27th. Three weeks after transplant, I’m able to walk several miles through my neighborhood without any shortness of breath, dizziness, or any of my prior heart failure symptoms. My goal is to run the Shamrock Marathon one year from now, and because of the excellent medical care and wonderful personal care I’ve received from my medical team, family, and especially Caroline I believe that goal can be met.

After my discharge, I posted my progress to social media and included a fundraiser for UNOS. While I was in the hospital, I was contacted by several people that told me that my story had reassured them in their decision to become an organ donor. I was inspired by their words and how much better, physically and mentally, my transplant made me feel and wanted to pay that feeling forward to others. In all, we raised $1,200 and counting for UNOS! 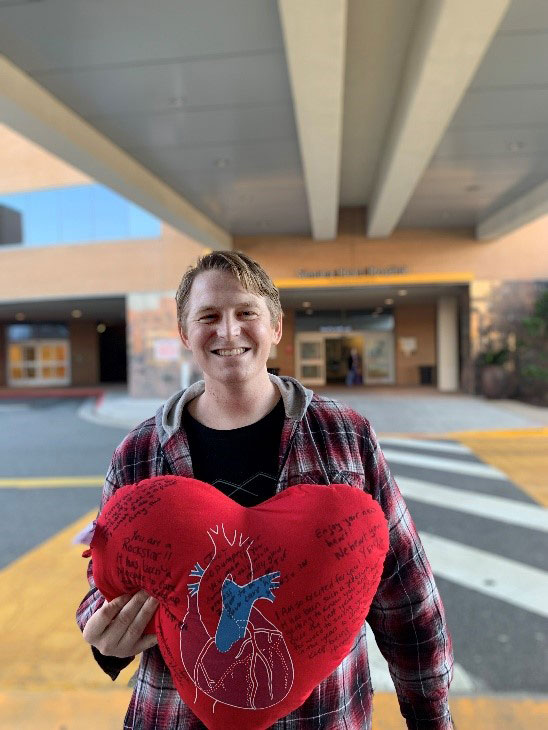 The day I was discharged.

Finally, I would like to extend my humblest thanks to my heart donor and their family. I don’t know who you are, but you quite literally saved my life and the lives of several others through your decision to become an organ donor. It’s truly humbling to know that someone was brave enough to register as an organ donor and that I’m alive to write this message, tell Caroline I love her, and see my family and friends again because of their selfless decision.

If you haven’t already, please consider registering as an organ donor.

Register to be an organ donor

Learn more about the need and register