Jerry Cahill: To the Brink and back after lung, liver, and kidney transplants 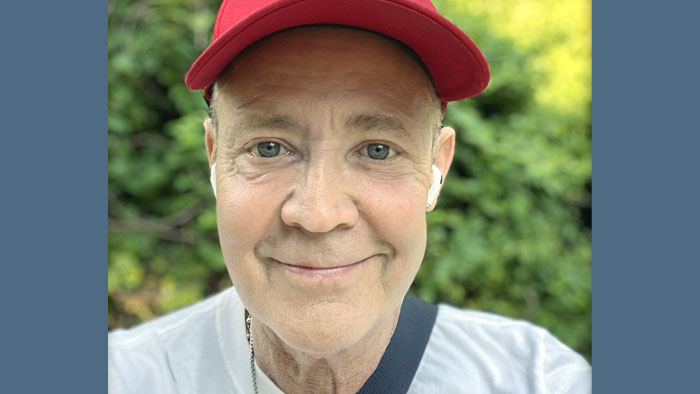 I grew up with cystic fibrosis, so I am no stranger to hospital stays, downswings in my health, and everything that goes along with that. But facing transplants presented me with an entirely new set of challenges.

My background is fairly normal – I grew up in a large family in Brooklyn, NY, where my parents encouraged my siblings and me to get involved in sports. Little did they realize, that would help save my life. Living with cystic fibrosis meant that my lungs constantly built up with mucus and bacteria, but exercise helped my body become strong and to clear my lungs.

I was small for my age, but that lent itself to me finding a sport I loved, and still love: pole vault. The hard work, constant running and training, jumping… it all made me feel free in a way I hadn’t before AND kept me heathy. A perfect match.

As I got older, I continued pole vaulting and running as I started a career and climbed the corporate ladder. But as it does with any chronic illness, my health caught up with me. In 2004, my health forced me to leave my job and go on disability. Luckily, around this time, I was introduced to the Boomer Esiason Foundation, where I found my place as a CF ambassador.

By 2011, my journey with cystic fibrosis reached end stages, and I was listed for a double lung transplant, which I received on April 18, 2012. My first transplant – one that saved my life and allowed me to continue my work with BEF so that I could keep encouraging other people with CF to exercise, stay positive, and lead by example.

Over the next 10 years, I continued to stay active – and biking became a passion of mine. While I faced the complications that all post-transplant patients faced, I did not let that deter me from reaching my goals. One of those was creating Bike 2 Breathe, a 500-mile fundraising bike ride that I did with fellow CF-patient Emily Schaller.

We hit the ground… biking… and the event took off! Emily and I biked in places from the east coast to the west coast and even went to Europe. It became something I looked forward to and that kept me motivated and healthy, until it didn’t.

After finishing our 8th Bike 2 Breathe, my liver and kidney deterioration hit the point of no return. My BEF colleagues dropped me off on June 27th (my birthday) at the hospital immediately after we finished for what I thought would be a routine checkup, but I could not have been more wrong. By July 3rd, my kidneys were shutting down, and I was taken to ICU, where I woke up on 24/7 dialysis, not knowing where I was. At this point, my doctors informed me that I would need both liver and kidney transplants, but it was an extremely risky 16-hour surgery. I already had a double lung transplant and I was much older than the last time – would I even make it through?

My medical teams, after many in-depth discussions, decided to activate me for the liver and kidney transplants list on July 21st. I had to live in the hospital until my name was called, which we thought would be months. Two hours later, my PA came in and said, “We have a donor.” It was completely surreal. My first reaction was, “A donor for what?” My team told me it was for both my liver and kidney – that it would be fast. The 29-year-old donor was in a local NYC hospital.

Everything flashed before me…

How could I do this again? Two more transplants? Was I strong enough physically?

My family couldn’t be there because of COVID restrictions; how could I go through this alone?

But I did. Only hours later, I was taken into surgery where I received a new start to my life.

Recovery has been so much harder this time. I’m older, I am already post-transplant, and I was in much worse physical shape than before. But I refuse to give up.

A young man’s life allowed me to continue mine. How could I do anything but honor his kindness and love by living my life to the fullest?

Today, a little over a year later, I am so thankful for my life. I’m biking again, coaching pole vault, and volunteering.

« Jaclyn Smith: I woke up in another world Race-based calculations eliminated from transplant candidate listing »