Khansaa’s Heart: The Miracle that Changed My Life 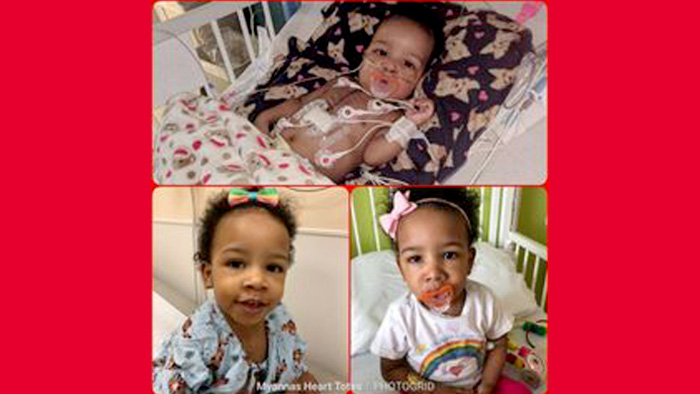 Khansaa is a walking miracle, and her unexpected journey began back in 2017 when I was seven months pregnant. During a normal checkup, doctors discovered that Khansaa had something seriously wrong with her heart. After further testing, she was diagnosed with Hypoplastic Left Heart Syndrome (HLHS), which is considered a critical Congenital Heart Defect (CHD). I had never heard of CHD until then, and the news was devastating for me and my family. I was told that on a scale of one – 10, her condition was a nine, and it felt like someone had sucked all of the air out of the room. I just didn’t understand how something like this could happen.

The cardiologist explained that Khansaa would need three open heart surgeries before she turned 4-years -old. The first was three days after she was born, and when it came time for her second one, she was five months old. As Khansaa was being prepared for her next surgery, her doctors took a closer look at her heart days before. They later discovered that Khansaa was in early heart failure and needed to discuss her being listed for a heart transplant. She was placed in the PICU and given intravenous medications to help improve the functionality of her heart, and the next day my husband and I met with the transplant team at UVA. After they carefully explained how much Khansaa’s heart was struggling, they recommended a more proactive approach, and that was to place her on the transplant list for a new heart. It was the hardest decision we ever had to make, but we knew that it could not wait.

On September 11, 2018, Khansaa was placed on the transplant list as a Status 1A. Fourteen days later, Khansaa’s heart failed completely and she coded multiple times. By the fourth time that Khansaa coded, they brought her back and prepared to place her on the ECMO machine, which would sustain her until she received a new heart. I continued to trust God and I placed Khansaa in His hands, believing that He would do the impossible. As hard as it was to sign the consent forms, knowing all the risks and complications associated with ECMO, I proceeded to sign the paperwork. Right after I signed the consent papers, the phone rang. I could hear the doctors say that Dr. L’ECuyer was on the phone, who is Khansaa’s transplant cardiologist. Almost one minute later, Dr. Lee came running up to me. She grabbed both of my hands and said, “Mom, they have a heart for Khansaa!” I completely lost it and burst into tears! This journey has been a rollercoaster of emotional highs and lows, and plenty of ups and downs. I am forever grateful to the donor family that selflessly gave my baby girl the gift of life. I could never say thank you enough, and to every donor/donor family that has made that heart wrenching decision, thank you. Without you, the lives of every transplant recipient wouldn’t be possible, and I thank God for each and every one of you.