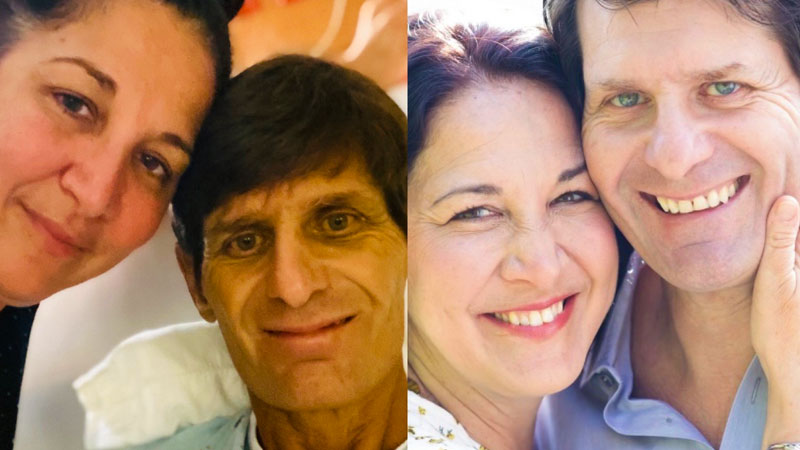 When I was diagnosed with the autoimmune disorder, primary sclerosing cholangitis (PSC) in 2003 just two years after marrying my wife, Lezlee, I felt shock and fear for our future. Being told I had an incurable disease where I would need a liver transplant made me feel like I had a grenade in my pocket. This fear changed my behavior and affected my relationships with family, friends, and co-workers. After 18 years, my body rapidly deteriorated. I was extremely fatigued, jaundiced, thin, and began losing hope.

Living and being listed in New York, which is a state with one of the lowest organ donor registrations, Lezlee and I realized that my chances of receiving a deceased donor were far greater in Florida. We tried getting a living liver donor but it did not work out, and frankly I did not want anyone risking their life in this way. And so, with the unwavering support of my wife, I temporarily relocated to St. Augustine, FL in October 2019.

When Lezlee found out there was a weekly Second Chance support group at Mayo Clinic for kidney and liver transplant patients and caregivers, she encouraged me to attend. Initially, she and our two children, who were in fifth and ninth grade, stayed in our home in Nyack, NY. They visited me on school breaks and even though I had a friend staying with me, it was so difficult being away from my family when my body was so weak. The support group gave me a community of mostly post-transplant patients who watched over me. By telling their stories, they gave me hope.

When the COVID-19 virus suddenly shut down our public schools in March 2020, Lezlee flew down with the kids. We stayed together in our rented condo in St. Augustine, FL. The kids missed their home and I felt terribly guilty. When our private yacht chartering business came to a screeching halt, Lezlee decided to write a book not only about our journey, and included some of the amazing stories she was hearing from other transplant patients we met at the support group. Soon the weekly the group became virtual. Once I became sicker than my MELD score indicated, I wanted to give up and move back to New York. Lezlee and the support group kept me going.

Through researching and writing her book, she became the best advocate not only for me, but for other people. She organized a successful public comment campaign to UNOS asking for exception points on MELD scores for PSC patients. She encouraged people to share their feedback during public comment. Ultimately, a policy change went into effect in July 2021 making it less restrictive for PSC patients to receive exception points.

Finally, after a year on the liver transplant waitlist in New York and another 11 months in Florida, and two dry runs, I finally got “the call” which led to my liver transplant on September 10, 2020. It was a miracle. Today, I am doing amazingly well. My donor liver feels like I have a new engine inside me and I am forever grateful. Lezlee’s book, “Saved by a Stranger: Life-Changing Journeys of Transplant Patients” is now published and available everywhere. I am so proud of her.

Her advocacy on behalf of me and other transplant patients is unstoppable. We are here to help others through this transplant tunnel as they helped us. And we are here to tell our story so that people have a better understanding of the importance of organ donation and transplantation.

« Honoring a life and finding joy in a bowl of cereal Richard Schmidt: Grateful recipient »