Brian Friberg: Now I have many years of hope 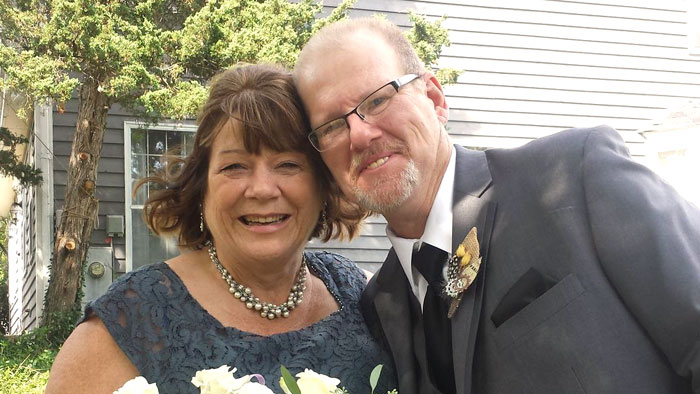 Brian has always been a family man. He grew up in the suburbs of Chicago playing sports, singing in choir and becoming an Eagle Scout. A devout Christian his entire life, Brian has shared his faith with many around him. He spent over 39 years as a second generation union electrician in and around the city of Chicago. His hobbies include hunting, fishing, adding improvements to his cabin in Wisconsin, and spending time with family.

He developed Nonalcoholic Steatohepatits (NASH) around 2011. Since then, there has been a gradual decline in health. It began with mild symptoms. But the progression of the symptoms and physical degradation slowly took away many things. It forced him into an early retirement. It prevented him from attending important events. It severely limited his abilities to enjoy his hobbies. And, due to hepatic encephalopathy, it was eroding what was always a bright, inquisitive and humorous mind.

Brian spent the week before the transplant in the ICU due to progression of the disease. He was at an all-time low, and the future looked grim.

February 5th, 2022 is a day that will live forever in both of our families. We do not know the details surrounding the events or the individual that lost their life that day. This person was somebody’s child, and undoubtedly loved by many. With the anticipation of feeling joy with news of a donor, it felt much different for us. It was a surreal feeling knowing that for Brian to be a recipient, another person had to give their life, and a difficult and agonizing decision had to be made. We sat in silence not knowing what was unfolding, but somehow experiencing the grief of a family far away.

The decision of your loved one to be an organ donor saved Brian’s life, and has given us so much hope for tomorrow. As a pillar of strength to so many around him, it also saved many others. A little old lady got her son back. Two sisters got their brother back. A wife of 39 years got her husband back. Two sons got their dad back. And a sweet four-year-old girl got her Farfar, (Swedish for grandfather), back.

His health continues to improve everyday. His physical abilities are slowly coming back, and his mental acuity is warming all of our hearts. Not a day goes by that we don’t think about the sacrifice your family made on that day. We will forever be grateful for the sacrifice that was made by your family to give us our father back.