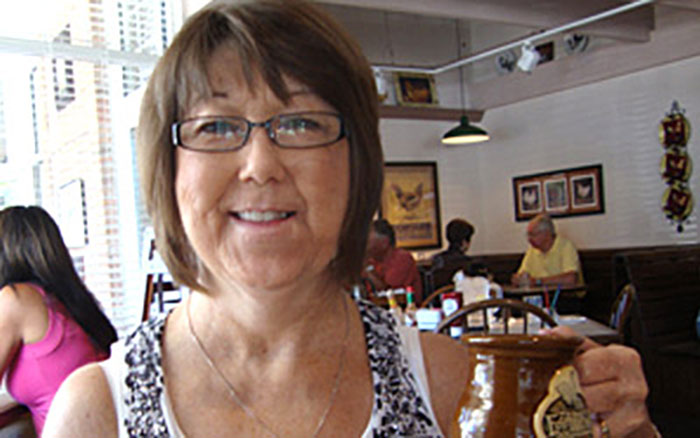 At age 11 I was diagnosed with Type I diabetes, often called juvenile onset diabetes at the time.

I was drinking water constantly and losing weight off my already small frame. When the teacher had had it with me asking to go to the bathroom several times each day she called my mother. Mom took me for a blood test. My glucose was over 600; I had lost 10 pounds in a month and was nauseous all the time. I spent the next 30 years taking insulin injections 4 – 6 times daily because I was known as a “brittle” diabetic.

At age 39 my kidneys began to fail. By the time I went on dialysis I couldn’t even hold a hair dryer over my head. Needless to say, my hair always looked bad and I had to go on disability and begin kidney dialysis treatments 3 times a week, 3 hours each day and now I was up to 8 infections daily. As a single mom, at the time, I was blessed with friends and family who gave me a great deal of support and kept my 8 year old from missing her skating, swimming and soccer practice.

By the grace of God I received the call in October of 2000 and a kidney pancreas was available for me in Wisconsin. Yeah – no more shots, finger prick blood testing 8 times daily and NO MORE dialysis!

Within 6 months I was able to return to my job as fitness coordinator of our local park district and also rebuild my strength and energy. At my 1 year anniversary I wrote to UMW and asked if they could convey to my donor family that I would be honored to meet them, if they wanted to meet me. The father of my donor graciously accepted my request.

You see, when I received my transplant I only knew my donor was a male, 18 years old, and died of head trauma. I wanted a name for the nameless angel, so I called him David, the slayer of Goliath, and thanked him daily. When I received the letter from UMW I never expected his first name to be David and …it wasn’t. His first name was Michael and his last name – yes, it was…..David!!! I realized, even more, the true miracle of my transplant.

I met Michael David’s father, Mick, and it was the best thing I could have done. Mick and I met at a restaurant ½ way between his location and mine. After a long hug and many tears we sat down to talk. (400)He thanked me for contacting him and felt a sense of peace during our 3 hours together. Mick was a very soft spoken gentle soul and was grieving, not only the loss of his son but also the loss of his wife who died 3 months after their son Michael passed. I could see the hurt and sorrow in his eyes and yet he was there with me, making me feel better.

Mick brought pictures of his son, who I came to know as “Mikey” and the rest of Mikey’s 5 siblings. He told me many (500) stories that brought cathartic tears and some much needed laughter for Mick while he reminisced. The waitresses continued pouring us coffee and wondering what we were doing; crying and crying and then laughing and crying! I was able to tell Mick about me, my transplant journey, and my family.

Since then I have tried to convey the importance of organ donation by presenting my story at high schools, local organizations, and anyone who will allow me to speak. I have a short segment on a local radio show that I mention organ donation on a regular basis (600) and I’m not shy! I was blessed to meet our Secretary of State, on the show, and thanked him for all the work that he does to support organ donation.

Those of you who read this today know the importance of registering to be an organ donor so spread the word loud and clear with heartfelt meaning. I don’t know where I would be today if it weren’t for my selfless donor and his family. Kidney dialysis and insulin injections take their toll on the body, but with the transplant I received I am still teaching Pilates and Exercise, working happily, and living a full life that I love. Thank you Mikey!!