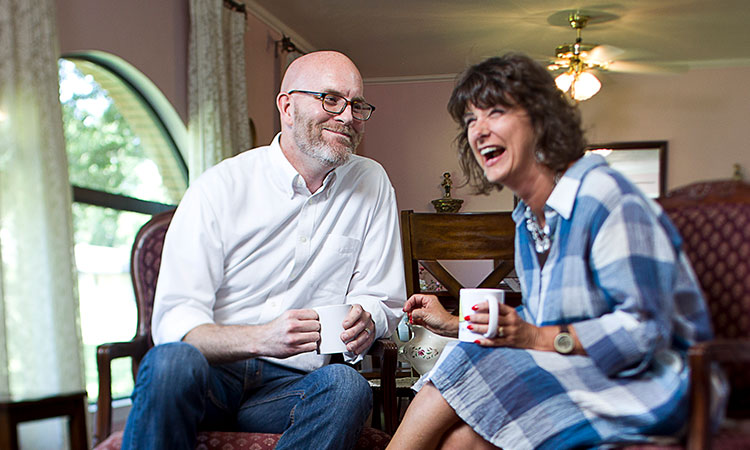 Michael Pettijohn was a strong guy. After four years in the U.S. Marine Corps, he went to work at HDR – a consulting engineering company – and started taking night classes at UT San Antonio to earn his bachelor’s degree in civil engineering. Busy as he was, he didn’t think much of it when he started feeling tired, and didn’t even notice his eyes had turned yellow until a coworker told him. When he mentioned to a classmate that he wasn’t feeling well, she urged him to go to a doctor. It took six months before he got his diagnosis: primary sclerosing cholangitis (PSC), a chronic disease in which your immune system attacks your bile ducts, leading to liver damage. 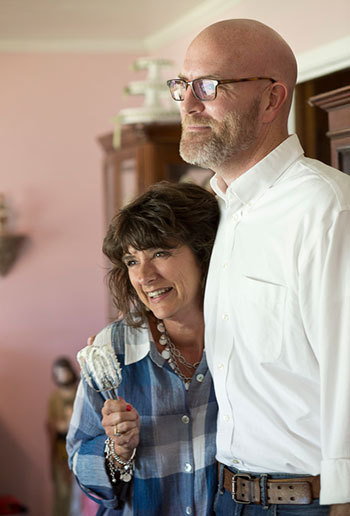 Fortunately, Mike started feeling better – good enough to start dating that classmate, Rebekah, whom he eventually married. They had two children. Then, in 2014, just as he was finishing his master’s degree, Mike took a turn for the worse and was hospitalized several times. In February 2015, he was placed on the waiting list for a liver. His best chance was a living donation of a partial liver.

Enter Tammy Ekrut, a mother of two and a secretary at XTO Energy. She was scrolling through her Facebook feed when she saw a post from a friend, Katie. Katie was also a friend of the Pettijohns, and she laid out Mike’s story, making the plea for a willing donor. Tammy didn’t know Mike. But that didn’t matter.

“As I read Katie’s post, I knew God was inviting me into something He was doing,” Tammy said. “There were only three main qualifications, two of which I met right off the bat.” She joked: “The third would require coming clean about my age, but since we were talking about someone’s future, I figured I could trust the medical professionals with the truth.”

She filled out the online application and was called the next day to schedule testing. When Mike and Rebekah heard that a stranger was willing to donate, they couldn’t believe it.

“Having someone being willing to put their life on the line for you is beyond humbling,” Mike said. They met by phone and then in person, and were immediate friends – their families would quickly become close. On September 14, doctors approved the transplant, scheduling it for October 27 – then after one scary hiccup, moved it to December 8. “My biggest fear heading into transplant was that I wouldn’t be around long enough to shape my children’s lives,” recalled Mike. “I wanted to see my son become a man, and walk my daughter down the aisle, and I was fearful that I wouldn’t be there to do those things. Tammy’s sacrifice, her gift, made it possible. She said ‘Yes’ to a stranger’s future and to his family’s future also. I just don’t know how you could begin to measure that.”

The surgery was a success. Mike received what he calls, “The most fun-loving and energetic right lobe of a liver that has ever been transplanted.”

Plus, he says: “I get the benefit of knowing Tammy, Jim and their daughters first hand, which is an honor and a pleasure. They are truly fantastic people and I love them. I wish everybody had someone like Tammy in their life.”

Tammy feels the same about Mike and his family.

“My ‘stranger’ didn’t stay a stranger long,” she says. “This sweet couple has been so gracious and loving to me, I feel like I’ve been the one who has received the greater gift. Our whole family feels like we have gained four new members.”

“You can’t out-give God. People tell me all the time what a selfless act I did, but I know how much more I received in return.”

« The special bond of Hudson and Uncle Trevor Losing a sister, saving a life with donation »